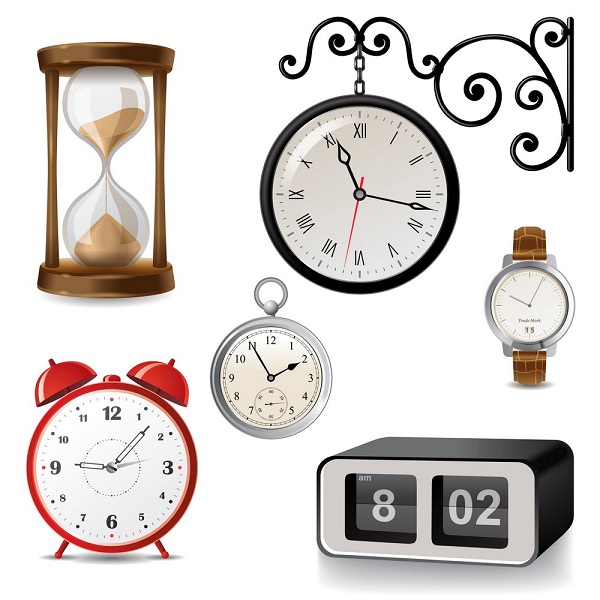 A clock is an instrument to measure, keep, and indicate time. The clock is one of the oldest human inventions, meeting the need to measure intervals of time shorter than the natural units: the day, the lunar month, and the year.

The timekeeping element in every modern clock is a harmonic oscillator, a physical object (resonator) that vibrates or oscillates at a particular frequency.[2] This object can be a pendulum, a tuning fork, a quartz crystal, or the vibration of electrons in atoms as they emit microwaves.

Other types of Clocks:

1. Sundials and other techniques
The sundial, which measures the time of day by the direction of shadows cast by the sun, was widely used in ancient times. A well-designed sundial can measure local solar time with reasonable accuracy, and sundials continued to be used to monitor the performance of clocks until the modern era.
2. Water Clocks:
Vitruvius reported that the ancient Egyptians used a clepsydra, a time mechanism using flowing water. Herodotus had mentioned an ancient Egyptian time-keeping device that was based on mercury. By the ninth century C.E., a mechanical timekeeper had been developed that lacked only an escapement mechanism. Later years saw the rise of automated water clocks in Arabia, China, and Korea.
3. Early mechanical Clocks:
None of the first clocks survive from thirteenth century Europe, but various mentions in church records reveal some of the early history of the clock.
Medieval religious institutions required clocks to measure and indicate the passing of time because, for many centuries, daily prayer and work schedules had to be strictly regulated. This was done by various types of time-telling and recording devices, such as water clocks, sundials and marked candles, probably used in combination. Important times and durations were broadcast by bells, rung either by hand or by some mechanical device such as a falling weight or rotating beater.
These early clocks may not have used hands or dials, but “told” the time with audible signals.4. Early astronomical Clocks:
The Clocks constructed by Richard of Wallingford in St Albans by 1336, and by Giovanni de Dondi in Padua from 1348 to 1364, no longer exist, but detailed descriptions of their design and construction survive, and modern reproductions have been made. They illustrate how quickly the theory of the mechanical clock had been translated into practical constructions, and also that one of the many impulses to their development had been the desire of astronomers to investigate celestial phenomena.