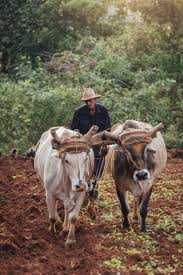 Be Lazy or Be Successful – Laziness is a state of mind and it evolves from two things. One is the lack of interest and other is the lack of responsibility.

The meaning of this proverb is ….our success does not depend on what Kind of tools we have but how we use them. A person may have all the equipmentes in the world but if he does not know how to use them he can never complete a job successfully. Whereas a person who can make effective use of what is available with him can make a success of any work given to him.

The same can be said of real life situations too. We must learn to hone our talents and tabs maximum benefit out of them and not blame destiny or fate when something goes wrong.

Kumar and Ravi were two farmers who were neighbours. Both owned a pair of oxen each with which they ploughed their land. Kumar worked hard all day long in order to get a good yield and looked after his oxen very well since he knew that they were very important for his farming activity

Ravi on the other hand was a very lazy and a miser who never fed his oxen properly but extracted maximum work from them and kept complaining that they were not doing a good job.

As a true friend Kumar advised and pointed out to Ravi that it was cruel to ill-treat the animals which were helping him make a living. Ravi paid little heed to Kumar’s words. He soon bought a tractor to plough his land and chased the oxen away since he no longer needed them. Taking pity on the poor animals Kumar took them under his wing although he could ill-afford to maintain them.

The monsoon soon arrived and it was time for cultivation. Kumar’s land was well ploughed and ready for cultivation – thanks to his oxen. Ravi in his miserly fashion had not maintained his tractor well and it kept giving him trouble. With the result, he could not get his land ready for cultivation on time. He lamented and blamed it all on bad luck not realizing that it was he who was responsible for his miserable state. Ravi not only lost out on a good yield by his laziness but also spent more money than required to repair his tractor due to poor maintenance.

Despite having better equipment Ravi was unable to get the best results, whereas Kumar was a good workman and hence was able to succeed with the limited resources that he had.

You cannot force someone to comprehend a message that they are not ready to receive. Still you must never underestimate the power of planting a seed.