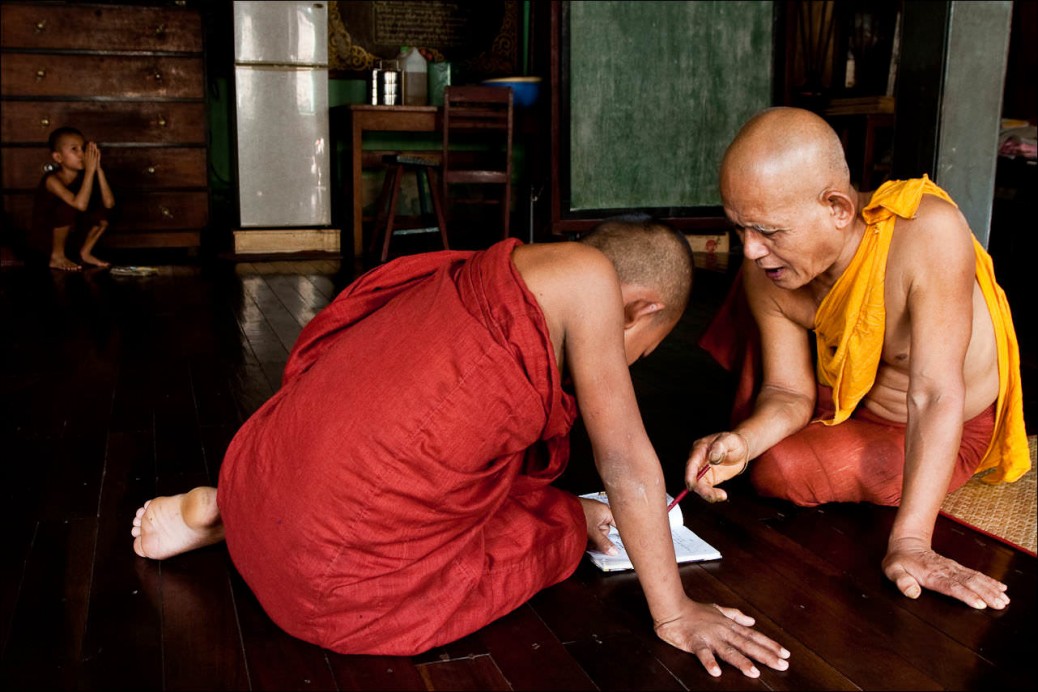 You need not have what is considered the best by the society, but you can make anything that you have the best. Enjoy it, live it totally, squeeze the whole juice of it –and you will nd that everything is the best. – Osho

One evening two monks arrived at their hut. For four months they had been away traveling, but now, as it was rainy season, they had returned to their hut. But when they reached their hut, the younger monk who was walking ahead suddenly became angry and sad: the winds of the storm had carried away half of the hut and only half was left. They had come back after four months in the hope that they would be able to rest in the hut and be safe from the rain, but now it was going to be difficult. Half of the hut had fallen down and half of its roof had been blown away by the winds.

The young monk said to the old companion, “This is too much! These are the things which create doubt about the existence of God in me. The sinners have palaces in the cities, nothing has happened to them, but the huts of poor people like us who spend day and night in prayer, is in ruins. I doubt whether God exists! Is this prayer business for real, or are we making a mistake? Maybe it is better to sin – because the palaces of the sinful stand safe and the huts of the people who pray are blown away by the winds.”

The young monk was full of anger and condemnation and he felt that all his prayers were futile. But his old companion raised his folded hands towards the sky, and tears of joy started flowing from his eyes. The young man was surprised. He said, “What are you doing?”

The old man said, “I am thanking God, because who knows what the winds might have done? They could have blown away the whole hut, but God must have created some obstacles for the wind and in that way saved half our hut for us. God is concerned about us poor people also, so we should thank him. Our prayers have been heard, our prayers have not been futile – otherwise the whole roof might have been blown away.”

That night both of them slept – but as you can imagine, both slept in different ways. The one who was full of anger and rage, who thought that all his prayers were futile, kept on changing his position all night and all kinds of nightmares and worries were racing around in his mind. He was worried. There were clouds in the sky; it was about to rain. Half of the roof had been blown away by the winds and they could see the sky. Tomorrow the rain would start – then what would happen?

The other slept a very deep sleep. Who else can sleep so peacefully except someone whose being is filled with gratitude and thankfulness? He got up in the morning and started dancing and singing a song. In the song he said, “Oh God, we didn’t know that there could be so much bliss in a broken-down hut. If we had known it before, then we would not have even bothered your winds; we ourselves would have taken away half of the roof. I have never slept so blissfully. Because half of the roof was not there, whenever I opened my eyes during the night I saw the stars and the gathering clouds in your sky. And now that the rains are about to start, it will be even more beautiful because with half the roof gone, we will be able to hear the music of your raindrops much more clearly. We have been idiots. We have spent so many rainy seasons sheltering inside the hut. We had no idea what joy it could be to be exposed to the sky and the wind and the rain. If we had realized it, we would not have bothered your winds; we ourselves would have got rid of half the roof.”

The young man asked, “What is this I am hearing? What is all this nonsense? What is this madness? What are you saying?”

The old man said, “I have looked at things deeply, and my experience is that whatever makes us more happy is the right direction in life for us, and whatever makes us suffer more is the wrong direction. I thanked God and my bliss increased. You became angry at God and your anguish increased. You were restless last night; I slept peacefully. Now I am able to sing a song and you are burning with anger. Very early, I came to understand that the direction in which life becomes more blissful is the right direction – and I have focused my whole consciousness towards that direction. I don’t know whether God exists or not. I don’t know whether he has heard our prayers or not, but my proof is that I am happy and dancing and you are crying and angry and worried. My bliss proves that my way of living is right and your anguish proves that the way you are living is wrong.”

The third point is to keep a continuous check on which direction it is that deepens your joy. There is no need to ask anybody else. You can use this criterion every day, in your daily life. The criterion is bliss. It is just like the criterion for testing gold by rubbing it on a stone: the goldsmith will throw away whatever is not pure and put whatever is pure into his vault. Go on checking every day using the criterion of bliss; see what is right and what is wrong. Whatever is wrong can be thrown away, and whatever is right will slowly start accumulating like a treasure.

Life consists of small things, but each small thing can be transformed into something glorious.