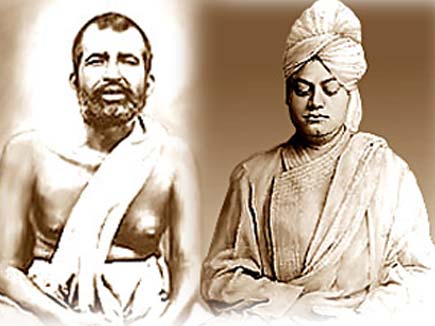 Vivekananda had never thought of this. He had gone to many thinkers. He was a seeker: when news came that someone knew, he went to him. From each one he returned empty handed. Words were many, but who has ever been satisfied by words? If you are hungry and someone talks about food, how will you be satisfied? Vivekananda was hungry. His eagerness was not the curiosity of a student but the inquiry of a seeker. He returned from place after place. He had come to Ramakrishna with this same inquiry. But in his heart he had the idea that here was an illiterate, uncivilized man. When he had found nothing with the great and learned, the well studied…

He had gone to Maharshi Devendranath. He was Rabindranath’s grandfather. He was very renowned, renowned as a great seer. He lived on a houseboat in the river. In the middle of the night Vivekananda jumped in, and climbed onto the houseboat having swum the river. The boat was in the middle. A dark night, a moonless night… the whole boat shook… Devendranath was meditating in the solitude of night. His eyes opened. A youth was standing in front of him soaking wet! There was a small flickering lamp on the boat. He asked, ”What do you want?”

Devendranath was startled. Is this a time to ask? Is this a time for inquiring? At midnight climbing on to someone’s houseboat soaking wet, standing there in the dark asking does god exist? He hesitated a moment. This young man seems to be mad. Seeing his hesitation Vivekananda dove back into the river. Devendranath asked, ”Young man! Are you going back? Why?”

So naturally when even a seer like Maharshi Devendranath, a world famous scholar, is not able to give any answer then this uncivilized villager Ramakrishna, what answer will he be able to give? He was filled with this idea. But the situation reversed itself. He had gone to shock Ramakrishna, he himself was shocked. Ramakrishna said, ”Do you want to know? And know right now? Shall I tell you now – this very moment?” He had not come thinking of knowing right now. He had not come prepared for this. He had never thought that someone could ask like this. And before Vivekananda could say anything Ramakrishna leaped up and pressed his foot on Vivekananda’s chest. This is not the way of knowledgeable people, this is the way of the ecstatic. But only the ecstatic know. They know, hence the ecstasy.

Vivekananda went unconscious and fell down. When he came to, three hours later, Ramakrishna said, ”Ask! Do you have more questions?”

It was like returning from some other world! He had had a taste. Then he became mad after this illiterate priest. Then he began running circles behind him. He had no scripture, no knowledge, no doctrine, no big degrees, nor was his name world famous. He had a small part time job at eighteen rupees per month performing worship at the Dakshineshwar temple. He was a poor man. He was an illiterate villager, he had studied only up to the second year. He didn’t know Sanskrit. No one had been able to attract Vivekananda, Ramakrishna drew him in.

Where there is an experience of god there is living magic.

Vivekananda went to many people, including Devendranath, Rabindranath Tagore’s  grandfather, with his questions. He was disappointed. When he went to illiterate Ramakrishna he got his answer, why? When he was expecting from everyone he was disappointed, but when he dropped his expectations, he got it. It is not whether other can give us or not, it is whether we are empty or not or whether we are ready or not.

Learning from the story: Be Empty.

Emptiness is actually a very beautiful state. It’s the closest that you’ll ever get to be able to experience stillness itself. At the same time, within that emptiness is fullness, because life itself is always in creation – it is never empty.

Let’s do the following process to experience Be empty, Be ready:

Sit with that feeling of emptiness. What I’m hearing is that it gets so intense and fearful for you that you run away from it. You run away by doing other things to get you out of this feeling. That is the habit that’s been created– the lifelong pattern. When it arises again, the invitation is to fully, and I mean fully, be with it to the point where you don’t wish it to change, because to fully accept something means that you are willing to be with it forever. Of course, it won’t last forever because forms constantly change and this feeling will change. That emptiness that you feel will suddenly burst into a fullness! It’s wonderful! Wow, this is a great feeling!

So there are two ways you can transcend this; by fully going into it, until you come out the other end, but there’s not of an expectation that you’ll come out the other end, remember you are willing to accept this feeling forever. Or, you feel it and at the same time expand your awareness to include any sense perceptions in the room, look around, listen for any sounds, or go inside the body and find a place where you’re not contracted, where there’s a quality of stillness or emptiness. We are unlearning the lifelong patterns of thinking and viewing life through the conditioned mind to viewing life through the unconditioned mind. The emotions and thoughts that we experience are not who we are – it’s not you.