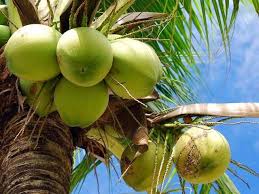 The coconut is a common fruit found in tropical climates around the world. It originated from the coconut palm, a plant pertaining to the family of the palm ceas, which includes nearly a million varieties.

Most people are familiar with 2 types of coconuts: the fresh green coconut for water and the brown ripe coconut for the meat. The first one has great quantity of water and a soft pulp, which is used for cooking to give light taste to drinks and sweets. This is in the earlier stages of development on the tree. As the coconut ripens on the tree it turns brown. It is literally dehydrating on the tree. This is usually seen in stores with the husk already removed and it looks about the same size as a grapefruit.

Uses of the various parts of the palm include:
1. The white, fleshy part of the seed is edible and used fresh or dried (desiccated) in cooking.
2. The cavity is filled with “coconut water” containing sugars which are used as a refreshing drink, and in the making of the gelatinous dessert Nata de Coco.

3. Coconut milk (which is approximately 17% fat) is made by processing grated coconut with hot water or hot milk which extracts the oil and aromatic compounds from the fibre.
4. Coconut cream is what rises to the top when coconut milk is refrigerated and left to set.
5. The leftover fibre from coconut milk production is used as livestock feed.
6. The sap derived from incising the flower clusters of the coconut form a drink known as “toddy” or, in the Philippines, tuba.
7. Apical buds of adult plants are edible and are known as “palm-cabbage” (though harvest of this kills the tree).
8. The interior of the growing tip is called heart-of-palm and is considered a rare delicacy.

9. The coir (the fibre from the husk of the coconut) is used in ropes, mats, brushes, caulking boats and as stuffing fibre; it is also used extensively in horticulture for making potting compost.
10. Copra is the dried meat of the seed which is the source of coconut oil.
11. The husk and shells can be used for fuel and are a good source of charcoal.
12. Coconut water is nearly identical to blood plasma and is known to have been used in emergency cases as an intravenous hydration fluid, when there is a lack of standard IV fluid.