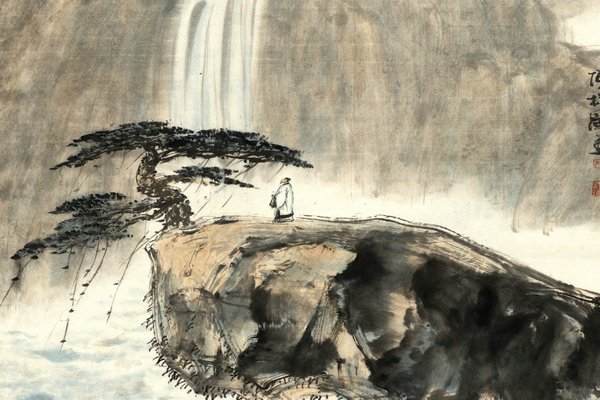 There is a beautiful story about Chuang Tzu, a great mystic of China. One morning, sitting in his bed, he looked very sad. His disciples had never seen him so sad. And never after waking up had he remained in his bed, sitting. What had happened? Was he sick?

They gathered around and asked him, “Master, what is the matter?” He said, “The matter is really difficult, I cannot solve it; perhaps you may be of some help. I will tell you what is the matter. In the night I dreamed that I had become a butterfly, and I was moving from one flower to another flower.”

The disciples said, “This is nothing to be sad about. In dreams we all do strange things; and this is not a bad thing, to be a butterfly – colorful, beautiful, moving from one juicy flower to another juicy flower. Why are you so worried?”

He said, “You have not heard the whole thing. The problem is, now I am awake and I am wondering whether Chuang Tzu dreamed that he is a butterfly, or now the butterfly has gone to sleep and is dreaming she is Chuang Tzu.”

The disciples remained silent; there was no answer to it. Chuang Tzu was pointing towards a certain phenomenon that all religions have been teaching – that everything is a dream. The butterfly is a dream, Chuang Tzu is a dream. Then what is real? The real is far away. And in this dream, don’t get disturbed. Whether you are a camel, or a donkey, or a monkey – it doesn’t matter. What matters is that you accept it without any resentment so that you can reach one day the real world of God.

After going through the story who felt that we are always in dream and far away from reality? Even if this much realisation is enough. The way to realise this is not to resist anything.

Nonresistance doesn’t necessarily mean doing nothing. All it means is that any “doing” becomes non-reactive. Remember the deep wisdom underlying the practice of Eastern martial arts: Don’t resist the opponent’s force. Yield to overcome.

Having said that, “doing nothing” when you are in a state of intense presence is a very powerful transformer and healer of situations and people. In Taoism, there is a term called wu wei, which is usually translated as “actionless activity” or “sitting quietly doing nothing.” In ancient China, this was regarded as one of the highest achievements or virtues. It is radically different from inactivity in the ordinary state of consciousness, or rather unconsciousness, which stems from fear, inertia, or indecision. The real “doing nothing” implies inner nonresistance and intense alertness.

On the other hand, if action is required, you will no longer react from your conditioned mind, but you will respond to the situation out of your conscious presence. In that state, your mind is free of concepts, including the concept of non- violence. So who can predict what you will do?

The ego believes that in your resistance lies your strength, whereas in truth resistance cuts you off from Being, the only place of true power. Resistance is weakness and fear masquerading as strength. What the ego sees as weakness is your Being in its purity, innocence, and power. What it sees as strength is weakness. So the ego exists in a continuous resistance-mode and plays counterfeit roles to cover up your “weakness,” which in truth is your power.

Until there is surrender, unconscious role-playing constitutes a large part of human interaction. In surrender, you no longer need ego defenses and false masks. You become very simple, very real. “That’s dangerous,” says the ego. “You’ll get hurt. You’ll become vulnerable.” What the ego doesn’t know, of course, is that only through the letting go of resistance, through becoming “vulnerable,” can you discover your true and essential invulnerability.

Learning from the story Chuang Tzu: Not To Resist

The Strength Of non-Resistance: Ancient Eastern Philosophy has taught a lot about the concept of non-resistance. This view has been deeply rooted as a cultural way of life as can be most popularly seen in the martial arts for example.

Most internal martial arts such as Tai Chi, for instance, are built on this principle of non-resistance and ‘action without action’ (Wei Wu Wei) or effortless doing. The idea behind this principle of effortless action is that when you don’t resist or work against the energies around you but actually work or flow with them, you become aligned and in equilibrium in such a way as to obtain a ‘soft and invisible power’.

The adept martial artist knows how to use the power and momentum of his opponent to overcome him without exerting any force or power.

Non-resistance is like the nature of water. The strength of water lies in its ability to flow around obstacles and in its suppleness. Its force is soft yet powerful.

On the other hand, resistance is friction, an act of opposing, blocking or impeding something. It generally implies working against natural forces as opposed to working with them.

Here are a few points which highlight this negative aspect of resistance to give you an idea of how it might affect your daily life:

1. Resistance always involves using energy-dissipating action. Did you ever realize how much effort and energy is needed to resist something as opposed to accept it?

2. It makes us block the flow of life’s energies. Notice yourself when you are passing through a phase of resisting or opposing something such as an idea or part of your life. Your energy is always on the low side. You are out of balance and moody.

3. As an effect of the above stress builds up. You start experiencing inner conflict and anxiety.

4. Resistance makes us unreceptive to new ideas and intuitions. It blocks our intuitive channels.

5. It sabotages our creativity, mental clarity and focus.

6. It stops us from appreciating the moment.

How to learn to flow without resistance:

1. Avoid trying to always be in control. We want to be constantly in control of our life, work, relationships, finances, etc. We feel that if we lose control, we lose the race, we lose our life. Of course the opposite is true. When we learn not to control everything we embrace life with more power and consciousness.

2. When something unwanted happens to you, be aware of your resistance towards it. Shit happens. Calm down and try to shift your perspective to one of acceptance. Ask yourself “How can I use this?” or “How does this affect the bigger picture of my life?”

3. Be open to your feelings without criticizing yourself.

4. When you are practicing awareness, meditation, relaxation or simply appreciating a beautiful moment you will undoubtedly be bombarded with a thousand distracting thoughts that divert you off course. Don’t try to resist or control anything. Just acknowledge them and let them flow. The very act of resisting trips your circuits and conscious thought kicks in.

5. Do not deny or resist failure. Recognize it and accept it.