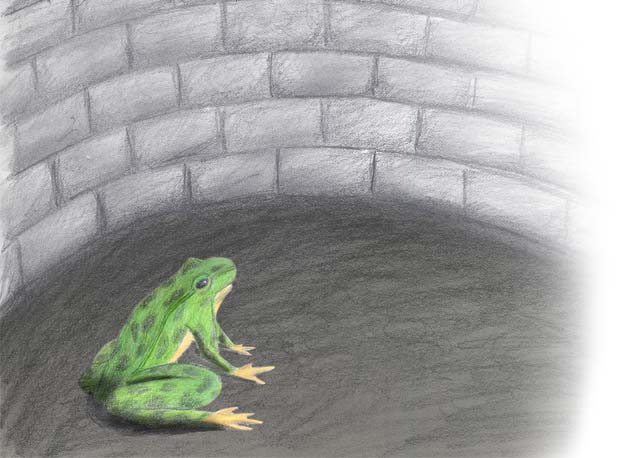 A group of frogs were traveling through the woods, when two of them fell into a deep pit. All the other frogs gathered around the pit. When they saw how deep it was, they told the two frogs that they were as good as dead.

The two frogs ignored the comments and tried to jump up out of the pit with all of their might. The other frogs kept telling them to stop, that they were as good as dead. Finally, one of the frogs took heed to what the other frogs were saying and gave up. She fell down and died.

The other frog continued to jump as hard as she could. Once again, the crowd of frogs yelled at her to stop the pain and just die. She began jumping even harder and finally made it out. When she got out, the other frogs said, “Did you not hear us?” The frog explained to them that she was deaf – she thought they were encouraging her to jump out of the hole the entire time.

If we can co-relate this story with our life, we immediately we realize how many times God gave us the opportunity to grow, find out our own strength, own wisdom, but we gave up by listening to others.

Two frogs it is symbolic, one has used his senses of hearing outwardly and other has used inwardly. We have five senses, sight, hearing, smell, taste and touch, it can be used two ways. But we are familiar with only one way. That is used only outwardly. We listen to others, we see others, we smell outer objects, we only know the taste of food, and we only know touch of others.

Same senses when used inwardly we grow in consciousness.

When we see ourselves we become watcher, observer of ourselves. We become scientists of the inner world.

When we listen to ourselves, our own wisdom, we calm down.

When we have a taste of our own quality we find that we have life into our action.

When we smell of our own fragrance we enter into meditation. We dissolve into universe.

When we experience our touch we transcend sex to superconsciousness. Our scripture of Tantra gave us this guidance.

This time let’s focus only on listening. When we listen to other and without using our own wisdom try to follow them we create misery for ourselves. Our misery is nothing but not having the courage to trust and act from our own wisdom. Our fear of failure is so much that we just avoid listening to ourselves. For us ego is more important than our life, our living, our misery.

Recollect moment when you took a courageous step to listen to your own wisdom, you will have a fear of the unknown, but you went through the experience of fear without listening or following it and when you got any result whether it was favourable or not but you got certain type of joy, energy, which was unexplainable. Which didn’t have any words, but feeling of joy. Against that when you have followed someone without using your own wisdom you will find that there are certain types of feeling maybe you are happy for your achievements but not really joyful about it. It has not made any difference in your growth or contribution in your experience. You were robot of someone else. You find that you have become slave of someone. Like first frog you are dead, may be alive in your body but your spirit of life is dead. You will feel certain pain in you.

Learning from the story Don’t Give Up: Follow Your Wisdom

The first principle in the wisdom of uncertainty is that everything happens for a reason.

Waking up is a metaphor for the conscious life, and the conscious life is what wisdom leads to. Every day we are driven by unconscious impulses and desires, and unexamined processes go on beneath the surface of the mind that lead to anxiety, depression, low self-esteem, self-destructive behavior, and every kind of pointless discord, from household tensions to war.

But the worst aspect of being unconscious, or asleep to use the metaphor of waking up, is self-limitation. We all go around with core beliefs about how insignificant a single individual is, how risky it would be to step out of the norm, and how only the gifted few rise above the average. The wise in every generation have asserted the opposite, that the source of consciousness makes human potential infinite. We can think an infinite number of new thoughts and say things never before said. In fact, there is no arbitrary limit on any trait that makes us human: intelligence, creativity, insight, love, discovery, curiosity, invention, and spiritual experiences of every kind.

Waking up allows us to escape all stories and to live free of self-limiting mental constructs. The real question is whether it can be done. Can you and I wake up? If so, how do we go about it? Are there awakened teachers who can provide examples of what it means to live the conscious life? This is exactly where wisdom enters the picture. Without living examples of awakened individuals, the whole enterprise would be trapped in a limbo of fantasy and wishful thinking. But when a society values wisdom, it turns out that the awakened exist among us and always have.

Anyone who wants to wake up is fortunate to be alive now, because despite our global problems, irrational behavior, and self-destructive denial, modern society is open to ready communication about every topic, including the exploration of higher consciousness. Where prior generations had little grasp of higher consciousness beyond the precepts of religion, millions of people today can walk their own path to self-awareness, choosing to include God, the soul, organized religion, and scriptures as they see fit, or to avoid them. Even “spirituality” is a term you can adopt or ignore — the real purpose of waking up is about consciousness.

We have always had the potential to be wise by using self-awareness to explore who we really are. A society driven by consumerism, celebrity worship, video games and social media gossip, and indifference to massive social problems feels like it could never find wisdom, or even the first impulse to wake up. But I’d argue that we are the most fortunate society to wake up in, simply because higher consciousness is open to anyone. I count this as the greatest opportunity facing us, to see that waking up is possible and to hasten toward it as quickly as we can.