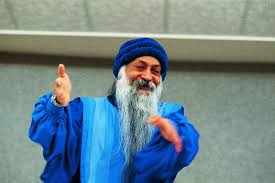 Shiva said: focus on fire rising through your form, from the toes up, until the body burns to ashes but not you.

Whenever someone was initiated by Buddha, the first thing was this: he would  tell them just to go to the burning place and observe the being burned, a dead body being burned. For three months he will not do anything; but just sit there and watch.

Buddha said, “Don’t think about it. Just look at it.” And it is difficult not to come upon the thought that sooner or later your body is going to be burned. Three months is a long period and continuously, day and night, whenever there is a body to be burned, the seeker was to meditate. Sooner or later he would start seeing his own body on the burning pyre. He would start seeing himself being burned.

If you are very much afraid of death you cannot do this technique, because the very fear will protect you. You cannot enter into it. Or, you can just imagine on the surface, but your deep being will not be in it. Then nothing will happen to you.
Remember whether you are afraid or not, death is the only certainty. In life, nothing is certain except death. Everything is uncertain; only death is a certainty. All else is accidental – it can happen, it may not happen – only death is not accidental. And look at the human mind. We always talk about death as if it is an accident. Whenever someone dies we say his death was untimely. Whenever someone dies we start talking as if it has been an accident. Only death is not an accident – only death. Everything else is accidental. Death is absolutely certain. You have to die.

And when I say you have to die, it seems in the future, very far away. It is not so – you have already died. The moment you are born, you died. With birth, death has become a fixed phenomenon. One part of it has already happened – the birth; now only the second, later part has to happen. So you are already dead. Half-dead, because once one is born, one comes into the realm of death, entered into it. Secondly: death is not going to happen in the end; it is already happening. It is a process. Just as life is a process, death is a process. We create the dualism – but life and death are just like your two feet, your two legs. Life and death are both one process. You are dying every moment.

The first thing a child does is to inhale. A child cannot exhale. The first act is inhalation. And the old man, while dying, will do the last act, which will be exhalation. Dying , you cannot inhale – or can you? When you are dying, you cannot inhale. The last act cannot be inhalation. Inhalation is birth and exhalation is death. But every moment you are doing both. Inhaling is life, exhaling  is death.

You may not have observed, but try to observe it. Whenever you exhale, you are more at peace. Exhale deeply and you will feel a certain peace within. Whenever you inhale you become intense, you become tense. The very intensity of inhalation creates a tension. If I tell you to take deep breaths, you will always start with inhalation.

Really, we are afraid of exhalation. That’s why breathing has become shallow. You never exhale, you go on inhaling. Only the body goes on exhaling, because the body cannot exist with inhalation alone. It needs both: life and death.

Excerpted From Meditation The First And The Last Freedom