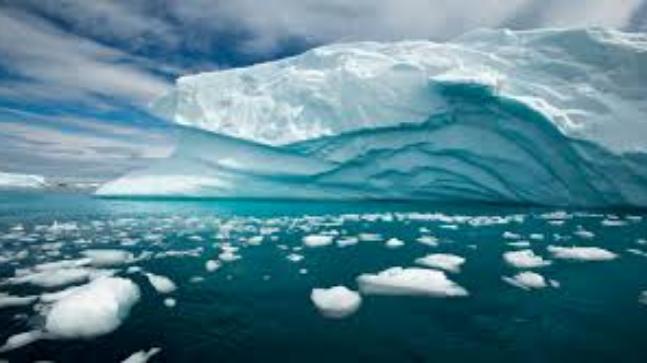 1. Ice Floe:  Ice broken up by wind, sea, swells, currents and tides. Has various names depending on the size, including small (65.5 ft-328 ft across), medium (328-1640 ft), big (1640 ft–6562 ft), vast (6562 ft–32,809 ft) and giant (more than 32,809 ft).
2. Frazil Ice: Fine spicules or plates of ice suspended in water; the first stage of “new” ice, when ice forming mixes with the upper levels of the sea.
3. Grease Ice: Coagulated spicules and plates; new ice formed under calm conditions
4. Shuga Ice: Accumulation of spongy white lumps a few centimeters across; new ice formed under agitated conditions.
5. Slush Ice: Snow saturated with water; new ice floating after a heavy snowfall.
6. Ice Rind: A brittle shiny crust; new ice formed on a quiet surface by direct freezing or from grease ice (less than 5 centimeters thick).
7. Nilas Ice: A later stage of new ice in which it has consolidated into a thin elastic crust; it can conforms to swells (up to 10 centimeters thick)
8. Young Ice: Cold temperatures cause additional freezing at the bottom and along the sides of ice.
9. Old Ice: Ice that’s survived at least one melt season; it’s less saline than first-year ice and considerably stronger, with more weathered topography. Can be categorized as second-year (survived one melt season) or multi-year (survived more than one melt season).
10. Brash Ice: Accumulation of floating ice made up of fragments not more than 6.5 feet across; the wreckage of other forms of ice.
11. Pancake Ice: A piece of new ice approximately circular (12 in.–9.75 ft across) with raised rims; formed from grease, slush or shuga ice freezing together or the break-up of ice rind or nilas.
12. Ice Cake: Accumulation of floating ice made up of fragments less than 65.5 ft across.
13. Floeberg Ice: Massive piece of sea ice composed of a hummock (a rounded knoll of ice rising above the general level of an ice-field) or group of hummocks frozen together and separated from surrounding ice. May float up to 16.4 feet above sea level.

14. Floebit Ice: Like a floeberg, but smaller. Normally not more than 32.8 feet across and protrudes up to 6.5 feet above sea level.
15. Ice Breccia: Ice pieces of different ages frozen together

16. Iceberg: Floating ice over 5 meters above sea level that has broken away from a glacier.
17. Ice Shelf: Floating ice sheet of considerable thickness attached to a coast.18. Tabular Berg: A flat-topped iceberg formed by breaking off from the ice shelf.
19. Bergy Bits: Floating ice less than 5 meters above sea level and not more than 10 meters across.
20. Growler Ice: A piece of floating ice smaller than bergy bits, almost awash.
21. First-Year Ice: Can be categorized as thin (12-28 inches), medium (28-47 inches) or thick (greater than 47 inches).