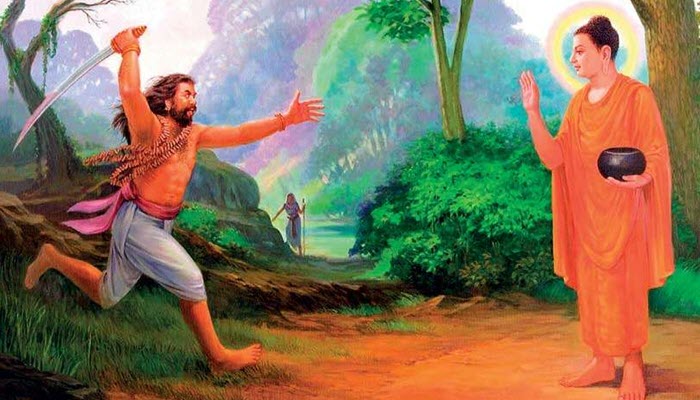 If you go into the outside world, people will be hostile to you, but you have to be compassionate to them. Let hostility and compassion stand facing each other. It is one of the fundamental laws of life that compassion cannot be defeated by hostility. Compassion simply changes the hostile person. So don’t be worried that you will be facing hostility. – Osho

He was a ferocious man. People stopped going close to him. The road that passed by the hill where he was staying was no longer being used. He had already cut off nine hundred and ninety-nine heads; he was waiting for only one more. The road that passed by his hill was utterly empty, nobody was coming. And then Buddha came to pass. That road was the shortcut, but people were going the long way around, just to avoid Angulimal. Naturally, Buddha took the shortcut.

His disciples said, ”Bhagawan, you don’t know what you are doing! Haven’t you heard about that madman, Angulimal? It is better to go the long, roundabout way, rather than to take the shortcut.”
But people like Gautam Buddha never turn back. He said, ”I cannot turn back, now even more than before. If I had not known about Angulimal, perhaps I might have taken the other road. That poor fellow is waiting for only one head! My work is done; I have known all that can be known, I have experienced all that can be experienced. Now there is no reason for me…. If I can be of some service to that poor man, it will be good.”

He went. Angulimal saw him. Buddha’s disciples, who were always clambering around him, by and by started creating a distance between him and themselves. If he was caught, at least they could escape. Angulimal saw Gautam Buddha coming. Even that dangerous man, who had murdered nine hundred and ninety-nine people already, felt for the ﬁrst time that he also had a heart. Gautam Buddha was looking so innocent, so childlike and so beautiful in the early morning sun.

Angulimal shouted, ”You please turn back, because only one head is missing! Perhaps you are a stranger… but looking at you, something in me says ‘Let this man go – there are many idiots, I can cut off their heads.’ Even if my mother comes here, I will cut off her head! But you please go back. Don’t come close to me – I am dangerous! Do you see my sword? It is waiting for the last head.”
Gautam Buddha continued. He stepped off the road and started moving into the mountains, closer to Angulimal.

Angulimal said, ”It seems you are more mad than me. Why are you going on and on and on?”

Buddha said, ”Angulimal, I stopped going anywhere a long time ago. I am not going anywhere, it is you who are.” Angulimal was standing there – Buddha was walking!

Angulimal said, ”Certainly you are mad. You are walking, moving, and you say you have stopped a long time ago. I am standing, and you say, ‘You are moving.’”
Buddha said, ”Just try to understand. Your mind is moving, thinking. My mind is silent, there is no movement. And you will not get a better head. It is really a joy to fulﬁll your vow. Prepare your sword.”

Angulimal could not understand what kind of man he was. He was in a great shock; he had never come across such a man! He was ashamed of himself for the ﬁrst time in his life. He could not look at Buddha eye to eye, because those eyes were radiating compassion, love, grace, joy, blissfulness, ecstasy – things that he had never known, but the fragrance was reaching him.

Angulimal said, ”I used to think I was a stubborn man – you are a thousandfold more stubborn. Now I cannot help you, I have to cut your head.”

Buddha said, ”It is an old tradition and convention to fulﬁll the last wish of a person who is going to die, and I have a very small wish. You fulﬁll it and then kill me.”

He said, ”What is your wish? Even if it is the biggest thing, I will manage it for you.”

Buddha said, ”No, it is a very small thing. Just cut off a branch of the tree under which you are standing.”

Angulimal said, ”What kind of thing are you asking? But okay, if that is your wish.” With his sword he cut off a branch.

Buddha said, ”Now, put it back. Let it be part of the tree again. Let it blossom again.”

Angulimal said, ”That is impossible. How can I join it with the tree?”

Buddha said, ”If you cannot even join a small branch to the tree, do you see the implications of it? Any child could have broken that branch off the tree, and you are a strong man – you have not done a great job. You can cut off my head, but can you manage to give me life again? And if you cannot create, what right have you to destroy?”

There was a moment of silence. The sword fell from Angulimal’s hands. He threw away that garland of nine hundred and ninety-nine ﬁngers, and fell at Buddha’s feet. He said, ”I never thought about it, that destroying something – any mediocre person, any coward, any idiot can do that. The real genius is creative – you are right. Please accept me as your disciple.”

He came back to the town. Even the king, Prasenjita, when he heard that Angulimal had become a sannyasin of Gautam Buddha…. He was a lover of Gautam Buddha, but he was afraid to go there because that man Angulimal could not be trusted, he could do anything any moment. But he wanted to see the man; he was so famous all around – hearing his name, even kings used to tremble.

He came, he touched Buddha’s feet and asked, ”I have heard that Angulimal has also become your initiate.”

Buddha said, ”Yes, he is sitting by my side.”

Prasenjita became so afraid, he pulled out his sword. Buddha said, ”Now it is not needed, put it back in the sheath. The Angulimal that you used to know is dead; this is a totally new man who cannot harm anybody. Don’t be afraid.”

And that very day when Angulimal went to beg in the city, the same cowards who had stopped even going on the road that passed nearby Angulimal’s place locked their doors, stood on their terraces with large piles of rocks, and started throwing rocks at the poor man.

He fell down; blood was ﬂowing from all over his body. Buddha was informed, and he came. Just a few more minutes and Angulimal would be gone. Buddha said to him, ”Remember one thing, that this act of yours – that you have not in any way reacted to the hostility of the people – is enough. You are dying as a truly awakened man.” Smiling, touching Buddha’s feet, Angulimal died.

Don’t be afraid of people’s hostility. Just be aware of your compassion, your love, and nothing is going to be wrong.

You must not return abuse in return of abusive words because your patience is self sufficient to burn that person from within. – Vidur