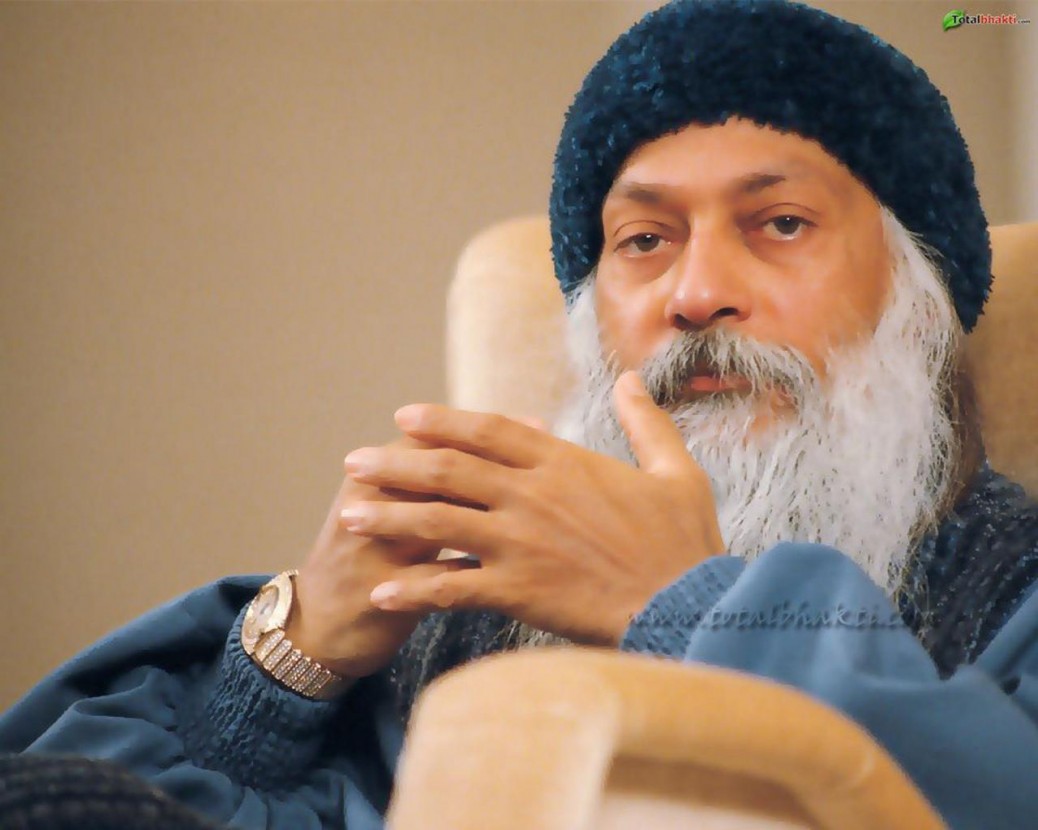 SINCE EACH OF US IS BORN ALONE AND DIES ALONE,AND ALONENESS IS THE STATE OF OUR BEING, WHAT IS THE FUNCTION OF THE COMMUNE?

THE function of the commune is exactly that: to make you aware of your absolute aloneness.

The function of the commune basically is to destroy all these fictions.

Nobody is with you.

You are alone, and you have to understand that this aloneness is so precious that you should not lose it.

It does not mean that you cannot relate. It only means that you don’t believe in relationships. Try to see the distinction between the two.

But a person who is alone knows that neither can you fill anybody’s gap, nor can anybody else fill your gap.

You can meet, but you will remain two alonenesses.

And it is beautiful that two alonenesses can meet, two individuals can meet, but the meeting cannot be made solid, concrete. It cannot be reduced to a relationship, it will remain a relating. It will always remain a changing flux, a movement, because the other person is changing and you are changing. You are not statistical – though that’s what people expect.

When two persons get married, both are getting married to a certain image which is going to change tomorrow. The woman you have married is not going to be the same tomorrow. She is alive, she is growing, she is moving – tomorrow will be tomorrow. But if you expect her to remain stuck here, at the moment when you signed the register in the court, you are trying to stop the clock.

But even if you stop the clock… your clock is not running the time. Both will carry the image stuck in their minds, and they would like you to go on fulfilling that image. If you in some way differ from that image, then you are deceiving, cheating. Nobody can fulfill that image, it is impossible, it is against nature.

The function of the commune is to give you the opportunity to be together, without any relationship.

It gives you the opportunity to relate to people without getting fettered to people.

You remain you, the other remains the other.

It is good if we meet today, it is a joy to be together, but if it is not going to happen tomorrow then there is no need to go on weeping for the spilled milk. It is pointless. Perhaps this meeting was meant to be only for this time.

You remain a stranger, the other remains a stranger, and you don’t reduce each other into acquaintances.

The strangeness is absolute, indestructible.

So the commune is not another society. It is not providing you with a society, a club, a congregation, a party, no. It is simply providing you a space, and an understanding that all these people are lonely, just as you are. But don’t try to fill it, because if you try to fill it, you are trying to do something against nature and you will be miserable. Hence, don’t think in terms of loneliness; better to think in terms of aloneness.

And to be alone is so beautiful; untrespassed, nobody trampling on you, you are left to be yourself and you leave others to be themselves. Yes, once in a while you meet….

India has produced a few great geniuses in this century; one of them was Rabindranath Tagore. I love one of his novels – The Last Poem is the name of the novel. There are two persons: one, a young man, a poet, a philosopher – he actually says what Rabindranath would like to say, he represents Rabindranath – and a woman who is in need of relationship. She is continually harassing him about marriage. And particularly in India, if one woman and a man are even seen walking together, that is enough for a scandal. They might not be doing anything, but just walking together and it is enough for a scandal; the whole town will be agog, and so many stories will start springing up from nowhere. And of course the woman suffers more because everywhere people start pointing at her.

So she was desperate. She was saying, ”Why do you go on postponing? – you love me, you want to be with me. If you don’t love me, I will not force you.”

And the man says, ”I love you, that’s why I am not going to marry you.” Now, this is very difficult for the woman. If she had been from my commune she would have understood. But what kind of statement is this? – ”Because I love you I cannot marry you.” But she goes on and on, so he says, ”I will marry you on one condition.”

They are sitting on the bank of a lake. He says, ”I will make my house on this side of the lake and you make your house on the other side of the lake. Once in a while, walking, perhaps we may meet. Once in a while, perhaps I may knock on your door or you may knock on my door. Once in a while, perhaps I am in a boat and you are also in a boat, and we meet on the lake. But it always has to be without any prearrangement. It has not to be a dating. I will never inform you that I am coming, you will never inform me that you are coming. I will marry you on this condition only. For a few days we may not be able to see each other. You will never ask me,’Where have you been?’ We will never interfere in each other’s freedom. We will remain as strangers, as we are now.”

The purpose of marriage is to be on each other’s head twenty-four hours a day. The purpose of marriage is to destroy each other in the name of love; to nag, harass, fight. The man is suggesting exactly the right thing: ”It will be a great joy suddenly seeing you on the lake… I will not be expecting it. Unexpectedly, I will find you in the jungle by the side of the lake….” Just to think of that unexpected moment is relating. There is no relationship.

He cannot send a message, ”You have to come tonight because you are my wife, otherwise I am going to court.” In fact the husband cannot say to the wife, ”You sleep in the other room.” That is enough to create trouble. The wife cannot say to the husband, ”You cannot sleep in my bed.” That is enough for trouble, because we have completely forgotten a simple thing, our aloneness. And we are trying to forget it as much as possible – the very idea should be dropped.

But aloneness is a natural phenomenon. And there is nothing painful about it.

When you know it, it is the greatest bliss.

Excerpted From Ignorance to Innocence CH: 3